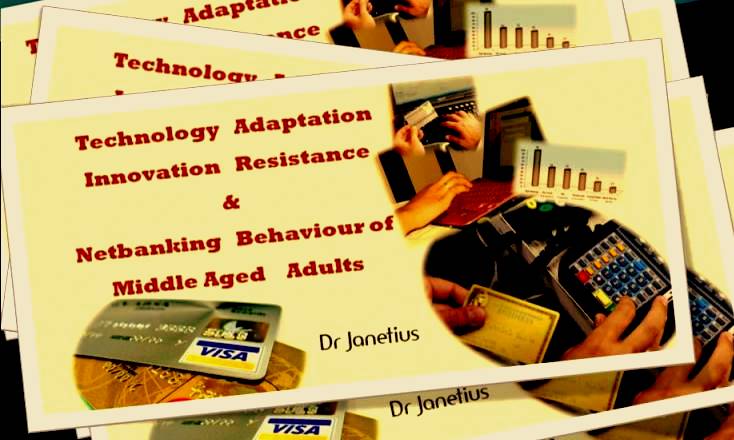 Middle age is a period between young adulthood and old age. Psychologists have defined specific characteristics for this group of adults who are in the making of their own person. Unlike the EPIC generation (Fadul, 2010), it is generally agreed that the middle aged people are poor in technology adaptation. Innovation resistance therefore can place them in a disadvantageous position in the society. The phenomenal technology boom in India in the last two decades have initiated internet and online banking and banks started offering cliental services in a more competitive way. How far the middle aged adults have adopted this technology and live in tune with the modern trends is an unexplored area.

Do all the middle aged consumers have adopted themselves to internet banking and the associated new technology; what are the reasons for utilising netbanking and also innovation resistance - are the main focus of this study. The subjects of this exploratory study are middle aged adults (aged 40 to 60) from Pollachi region in Tamil Nadu. Convenient sampling was used to collect data. The data was analysed using Innovation Resistance theory (Ram & Sheth, 1989) and the Technology Acceptance Model (Venkatesh & Davis, 2000) to identify online banking behaviour.


Introduction and the Review: Studying the behaviour pattern of middle aged adults is relatively a recent phenomenon. In the beginning of 20th century, the average life expectancy was less than 50 years. After the advent of technological developments in the field of medicine, lifestyle has changed considerably and psychologists started to focus on the various stages of human development. Thus, studies on middle adulthood started to gain considerable importance. Although there is no consensus among scholars on the chronological age brackets of middle adulthood, 40-60 is the popular understanding. During this period, many changes have been identified: the most notable changes occur in physical condition and health, career development and finance management, marriage and parenting and, leisure time activities. Psychologists generally believe midlife as a period of defining one’s own self and achieving maturity towards self-actualisation (Janetius, 2010). Corey (1986) and Levinson (1978) who have made extensive research in the field of midlife conclude that a more rigid life style is commonly seen among adults in midlife. In this regard, it is worth studying the middle adulthood population and to know their adaptation strategies to modern day technology as well as their innovation resistance.

The arrival of internet has changed the nature of communication in every sphere of daily living. Due to the inevitable nature of its usage, financial institutions drive consumers and businesses to change their traditional modes of operation and adopt one or other way the modern trend (Gardener et al.1999). As a result, the financial services have become easier to access and transact and, banking institutions use it lavishly and competitively in attracting clients.

Netbanking or online banking as it is popularly known has emerged as one of the most cost-effective banking applications over the last decade. Gone are the days in which people queue up on Mondays in front of the banks to make financial transactions after a weekend closure, and wait for a new month to begin to get their salary and pay bills. Today any financial transaction could be done on mobile and at homes 24x7. ATMs, credit cards and debit cards have made purchase and pay easier than ever. The different modes of service delivery channels through which consumers can interact with the banks have increased tremendously these days and made life more easier than couple of decades ago. No bank can survive today without offering ATMs, debit and credit cards, internet and other wireless banking services even in small towns and villages.

The present day younger generation that is born and brought up in the modern technology, often labelled as "EPIC" because of its peculiar characteristics of experiential, participative, image-driven, and connected (Fadul, 2010), is very much familiar with the netbanking and other online services. On the other hand the middle aged people are introduced to the mobile and internet technology in the recent past and therefore it is an obvious fact that not all of them are familiar and utilising these modern facilities. We can identify two theoretical bases for this phenomenon: i) Innovation resistance and ii) Technology adaptation.

Some customers resist innovations either because it poses potential changes from a current satisfactory status quo or because it conflicts with the consumer’s belief structure (Ram & Sheth, 1989). Innovation resistance is also determined as 'a preference for existing, familiar behaviours over novel ones' and is often considered as a special form of resistance to change (Arnould et al. 2004).

Objectives:  The objectives of this exploratory study are twofold. First it explores whether all the middle aged consumers have adopted internet banking. Secondly the study identifies the reasons for utilising netbanking and reasons for resistance and non-use.

Methodology: The subjects of this exploratory study are 245 middle aged adults (aged 40 to 60) from Pollachi region of Tamil Nadu. Convenient sampling was used to select subjects for this study. A multiple option interview questionnaire was used to collect data. The data was analysed using Innovation Resistance Theory (Ram & Sheth, 1989) and the Technology Acceptance Model (Venkatesh & Davis, 2000) to identify netbanking behaviour.


Results: The sex of the study population was almost equally divided (male 49% and female 51%) and their educational qualification range from high school to postgraduate college studies. None of the subject was uneducated. Nearly 40% of the respondents were diploma holders or high school graduates. Nearly 54% of the subjects were college graduates and 6% education graduates.
Table:

In spite of the fact that all the 245 subjects studied are educated and nearly 72% of the subjects are diploma holders, graduates from college or from educational field, it is amazing to know that nearly 77% of the of them do not use netbanking services. Only 23% of them use this modern technology. Among the postgraduates, only 40% use netbanking and online banking technology.

As per the reasons for choosing a particular bank or opening an account in a bank, only 5% of the subjects choose a specific bank for the sake of online banking. Majority of the subjects prefer better customer service and some people prefer a bank that is close to home or office or easy to access.  Nearly 28% of people do not have personal preference for a bank.

Those who use netbanking services use it mainly for checking the balance followed by online payments, various purchases, fund transfers and account statement downloading. They also use minimally for checking their loan status and credit card related issues.
Those who do not use netbanking technology have the following reasons. Majority of the subjects claim that they are not familiar with the technology. They also claim that they do not venture into this technology because of less transaction. Some do not use netbanking due to lack of computer facilities at home or at their workplaces. Some of the subjects believe that online transactions are not reliable and their personal information could be stolen. Few others also feel that online banking is complicated and time consuming; and yet others mentioned that their bank has no good online banking facilities.

Discussion: The results of the study confirm the view of psychologists that the middle aged people are set in their way of life, leading to innovation resistance rather than technology adaptation. As the subjects have pointed out, the top reason for using netbanking is to save time and energy as well as doing banking works at their own convenient place and time. Therefore these innovations in the banking sector are good for the consumer and they are improvements over existing practices.

Not familiar with the modern technology

Do not have much transaction to do netbanking

It is not safe to do netbanking

On the basis of these reasons for resistance, few myths and irrational thinking could be identified as they are conceived and revealed by the middle aged adults of this study, ultimately leading to resistance to innovation and the use of modern technology.

1) Netbanking is for the people who have lots of money and do daily transactions - This is not true as we can venture into netbanking even if we have a single transaction in a month.

2) Netbanking is complicated and time consuming - This is also not true as many of the netbanking middle aged people have identified ‘time saving’ as the major reason for using this technology.

3) Netbanking is not safe and personal information can be stolen by anybody - This also shows the avoidance of risk taking behaviour among the middle aged people leading to the false belief. Certain amount of risk is there if one uses public computers at browsing centres. However, as per the directions of the bank, if proper precautions are taken by the individual customers, like changing the password regularly, using a password with alpha-numerical characters, fraudulent malicious cybercrimes could be reduced to minimal.

Conclusions: The study was conducted to identify the netbanking behaviour of middle aged adults in and around Pollachi region in Tamil Nadu. The study has identified that nearly 77% of the people being studied do not use net banking. More than technology adaptation, innovation resistance is seen among middle aged adults. Based on the study the following recommendations are put forward for banks for a more usable online banking among middle age adults. There is a need to highlight the usefulness and ease of use for making better awareness among people on netbanking so that many more middle age adults would opt for netbanking facilities in the future