In the Indian culture, famous Carnatic musicians ask the music aspirants to sing Sa - Pa - Sa (Do-Sol-Do) notes of music without any aid to check the musical ability before admitting them to the systematic classical music classes. This contradicts the naive concept - anybody can do any job.  In the beginning of the 20th century, Frank Parson came with a new motto ‘right person for the right job’ that changed the outlook towards job in America  and the society moved towards ‘only certain people can do certain jobs’. Hundred years since Parson’s dictum changed the vocational outlook in America, developing countries like India and its major rural population still struggle to identify a clear understanding of self, right knowledge about the opportunities, and prospects of the particular work and the realistic understanding of these two to be successful in a profession. This longitudinal study identifies the ambiguity surrounding vocational choice of rural college students and helps them to be successful entrepreneurship.

In the beginning of the 20th century, Frank Parson who is considered the father of vocational guidance came with a new motto ‘right person for the right job’ that changed the outlook towards job in America (Parsons, 1909). From a naive concept - anybody can do any job - the society moved towards ‘only certain people can do certain jobs’. This is not new in the Indian culture. Famous Carnatic musicians ask the music aspirants to sing Sa - Pa - Sa (Do-Sol-Do) notes of music without any aid to check the musical ability before admitting them to the systematic classical music classes. Hundred years since Parson’s dictum changed the vocational outlook in America, developing countries like India and its major rural population still struggle to identify a clear understanding of self, right knowledge about the opportunities, and prospects of the particular work and the realistic understanding of these two to be successful in a profession.

What makes some people successful in the given/chosen career and others fail miserably? Why does pupil often rumour that they never had a good teacher or if asked by someone to identify ‘how many “real teachers” they met in their student life’ count their few fingers and giggle. Settling in a new town, ask your neighbours which of the doctors in the town is a gifted person to cure, the folks blatantly mention the name of one or two doctors. Is it not true that all the doctors follow the same curriculum and study similar syllabi? All these and many more similar questions take us back to the beginning of the 20th century Parson’s concept.

Career development is a process of choosing from the various occupations available for a person (Brown & Brooks, 1996). Due modern technology and globalization the career options have expanded enormously and more and more people switch jobs easily at any period in life. Various psychologists and school of thought have the concept that career development cannot be separated from human development and they go in hand with the personality development (Ginzberg, 1972; Holland, 1992; Roe, 1970; Super, 1994). Therefore, career counselling has become an essential part of guidance in the developed countries.

There are two major players in every career success: aptitudes and interest. Aptitude is the inborn capacity of a person, and has its origins in inheritance and early childhood development (Super, 1994). A person's aptitudes, the natural ability to do something well stabilizes in the adolescent period, and remain so for the rest of a person’s life. Discovering that gives people self-awareness and discern that at the right time makes the person thriving. On the other hand interests are transitory and can be easily changed or influenced by outside factors.

In India, psychological services to assist to identify aptitude and real inborn potentials are scarce, young people are often confused in their career choice. Instead parents, teachers and other educated neighbours play the role of a professional psychologist (Janetius, 2011). Mini (2010) who made a study of placement cells in Kerala colleges has identified a strong influence of parental preference in academic discipline as well as job selection. Some studies have also substantiated the role of intelligence, socio-economic status of the family, parental influence, school influence, needs and values as motivating factors in specific career preferences of adolescents in India (Vasantha, 1977; Yadav, 1979).

The objectives of this study to identify the ambiguity surrounding vocational choice of rural college students and help them to be successful entrepreneurs. This longitudinal study has used counselling data of 320 rural students who received counselling in the last four years. Together with that focus group discussions conducted for Sophomore College students in the last three years were also used.

Results and Discussion: Nearly 80 percent of the students who are in the college have no clear knowledge about their choice of courses. So also nearly 85 percent of the students say that they are not clear which job they want to take up after graduation. Of the 22 students (7%) who want to start their own business 18 students (85 percent) have no clear idea what kind of business they want to start. The choice of courses or their future profession/job or business they plan out has nothing to do with their aptitude and interest.

Case Presentation: The following cases will bring out the dictum of Frank Parson and his ‘right person for the right job’ clearly.

Case One: Mr. X, Chief Engineer of Hydro-electric system in Assam, aged 57 years is a self-conscious person, concerned about his approaching retirement with a nagging feeling that he is holding a job not defeating his interest or aptitude. After listening to a psychology lecture by the researcher, Mr.X. approached him to find out how he can identify his real interest and aptitude, after long years of service in a particular position. The researcher quoted from real life situation of reading a daily newspaper and Sunday magazine in which the person instinctively picks and reads a particular news item. This unconscious act is nothing but the inherent interest what an individual has developed over the years. This simple remedy made Mr. X to appear convinced and relaxed.

Case Two: Mr. M. aged 25 years is the founder of a Spoken English Centre in Arunachal Pradesh. This dynamic and enterprising youth from a rural background had a difficult and disturbing relations with his father who was insisting him to be an engineering graduate and dare not enter the house without completing engineering course. To the dismay of his parents, he discontinued his engineering studies in Bangalore, took up a job in airlines industry and pursued English Literature studies through Distance Education. The interests in literature and passion to contribute towards development of younger generation, he nurtured the fire of passion to start a Spoken English Institute. He realised his dream of being a Literature Graduate and at the same time fully channelized his energies for maximum satisfaction. Day and night he thinks of improving his centre. For any other vocation in life he probably would not have given such a soulful involvement.

Case Three: The psychologist had an interaction with 40 students of a class doing some business related course in a college. He wanted to find out the media exposure of the students and asked, how many of them read daily newspapers. None in the class raised their hands. Next he queried how many watch TV News. None answered in the affirmative, but for the two. When the Psychologist pursued further to verify whether the student is telling the truth he asked one of them to narrate a news item he saw in the previous day. To this, one student recalled the recent devastation of cyclone in Australia. Being a rural student, the Psychologist was rather astonished and wanted to know why this particular student is interested about the calamity in a faraway continent. The student replied, it was not the calamity and that he was more interested in matters related to Geography and was a keen observer of weather reports. When the student was asked about his academic performance, he gave a reply that reflected his varying interest in the current course of study (Management) and his real interest in Geography. He replied that his average score was 60+ and if it would have been Geography he would score anywhere between 85 to 90 percent. This is a clear case of a rural parent forbidding for a study which is neither popular nor job oriented in his view. Ultimately, the student misses his subject of aptitude – Geography.

Case Four: A rural girl student studying computer science appeared confused and called on the counsellor for assistance. She was confused on her future course of her higher education. She admitted that her continuing computer course was much against her wishes and desires. She always wanted to be a fashion designer. She was even contemplating to pursue fashion designing course against the interest of her naive parents who considered fashion designing as something not decent. She confided to the counsellor to study whatever the parents wants her to do but to be a fashion designer on her own at a later date. This is a classic case of a girl wanting empowerment.

The study identifies the following common problems faced by rural students in their future vocational choice:

1.      There are no provisions for the students to identify their aptitude and interest

2.      Students are not helped to plan for their future based on their aptitude and interest either in the Secondary schools or in Colleges

3.      The choice for academic pursuits in the higher education are influenced by the availability of courses in the college or hearsay

6.      Good number of students opt for any graduation leading to any job irrespective of their academics

The Indian educational system does not have a strict entrance in the colleges to identify aptitude and interest before they are admitted for a particular stream of study. Therefore the students need primarily some major assistance to identify their inner capacity, aptitude and interests so that selection of their academic pursuits will lead them to the right profession.

A three step simple formula: Discuss - Identify your ability, talents and filed of interest – identify right job in the field or start entrepreneurship.

Conclusion: The study identifies the current situation of vocational preference among rural students. Although psychologist reiterate down through the centuries that aptitude and interest and the related personality variable are the token for success in any profession or business venture, they are rarely considered by students due to lack of facilities. The study highlights Frank Parson’s concept ‘combination of aptitude and interest’ - the old wine in a new jar, as a mantra for emerging rural entrepreneurship. 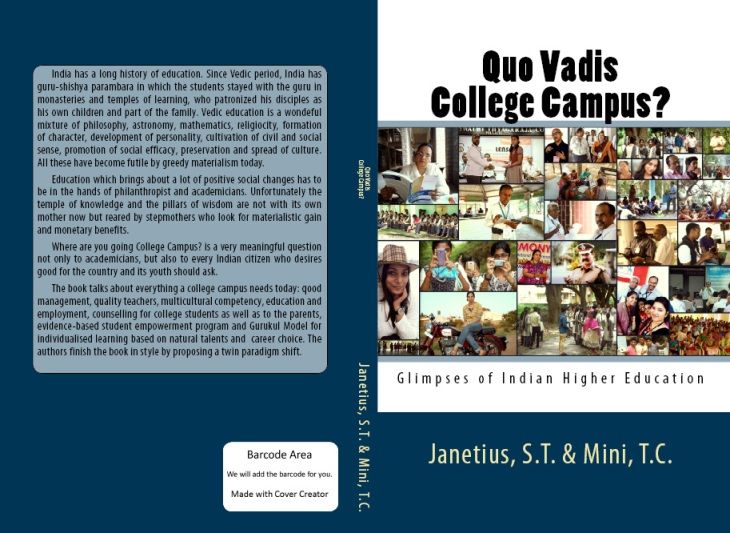