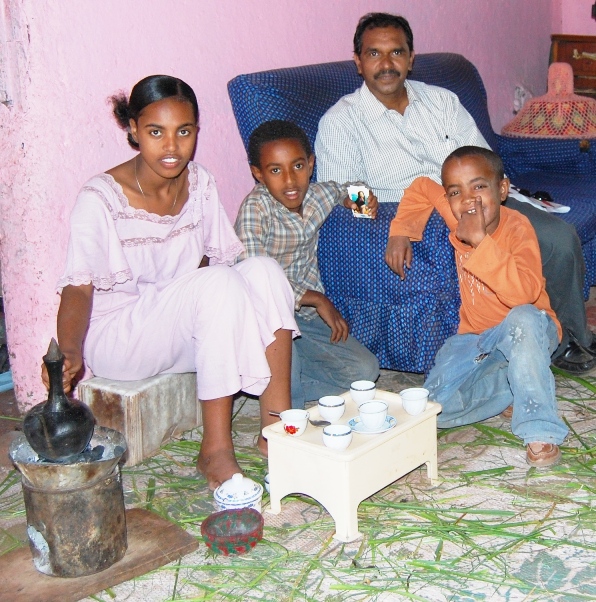 Ethiopia is said to be the birth place of coffee, locally called bunna. Coffee is cultivated all over Ethiopia, especially in the highlands and in the southern lush forests. In the south of Addis Ababa, especially after Shashamane (the famous place for Bob Marley and his Rastafarians) we can see coffee plants grow natively in the lush surrounding forests, anywhere and everywhere. Unfortunately, now a days coffee plant has been replaced by a stimulant plant called Khat (exported to Middle East). The tender leaves of Khat plant when chewed cause excitement, loss of appetite and euphoria.

Coming back to the Abyssinian coffee story – there are thousands of legends and fables about the invention coffee in Ethiopia. The popular story goes like this: A young shepherd noticed that his goats pranced in an unusually frisky manner after chewing the bright red berries from a tree. The amused shepherd also ate a few of them and was excited after that. An orthodox monk from a monastery, who found the boy in that invigorated state enquired about the red coffee berries, ate a few of them and was awake during the midnight chanting.  Thus the coffee came to the knowledge of the world.

The coffee ceremony goes this way. It is prepared inside the house. A special kind of grass (goozguaz) is spread over the ground, charcoal stove is kept and coffee beans are fried in a traditional clay fry-pan (mitad). Now this mitad is replaced at most places by a tin or metal fry-pan. Frankincense is also lit to fill the home with a sweet fragrance. When the beans are fried, the aroma of coffee spreads the air, the lady (generally coffee ceremony is done by a lady, men are not allowed to do this kind of work, no place for women emancipation) who fries the beans will take the fry-pan around the guests to spread the aroma of coffee.

Once roasting is over, it is pounded in a small traditional wooden machine (mukecha) then and there, meanwhile water is boiled in a mud pot (jebena) specially designed for this purpose and coffee powder added in the water, allowed to boil and thus brewed. Often coffee is taken with plenty of sugar and no milk added. It is always served in a small/tiny cups (I have no idea about traditional cups, but everywhere china-clay cups are used). I always ask for coffee with less sugar so that I can enjoy the taste of coffee not sugar. Coffee ceremony is a kind of three-course drink that is taken three times - 'Abol' (the first round), 'Tona' (second round) and 'Baraka' (third round).

By the by, do you know what is the world's most expensive coffee?  Kopi Luwak or Civet coffee is the world’s most expensive coffee. The coffee berry is eaten by the Civat (a cat like animal) and similar animals, the beans pass through their system undigested. The excreted kernel are washed, and given a light roast and wonderful delicious coffee is made. It is expensive; a cup of coffee costs around 1200 to 1500 Rupees